There are some steps I took for integrating react-native development with visual studio code, the main benefit is having a faster development cycle, integrated debugging and above all fast feedback cycles.

Debugging your react-native app inside vscode

This one is pretty straight foward, download the react-native-tools plugin for vscode, install them, the trick however lies in the proper configuration of your application.

In my case I have configured different schemas/flavors of our app, as well as some environment dependant configuration for deploying them, this means the default configuration doesn’t work.

Once you have the extension installed (and created the launch configurations), you can add the following commands to launch a different simulator and configurations:

After everything is said an done, you should be able to set breakpoints in your code and directly debug your react-native app.

Debugging your jest tests in vscode

The next one is making the test workflow a lot faster, since most of the time your tests will be running in a headless environment, getting the value of the variables and/or the render tree can be frustrating and difficult, being able to attach a debugger to your tests makes life a lot easier, this one has to do with launch configurations as well, you can create the following configuration in your launch.json:

There is nothing special about this configuration, but you can easily run your tests directly from vscode without having to switch back and forward from your console, and as mentioned being able to have debugger breakpoints.

The next one is also based on an extension, the github pull requests extension, it is not perfect as it is still in somewhat of a beta phase, be the good thing is that you have all the editor tools at your disposal when reviewing code. 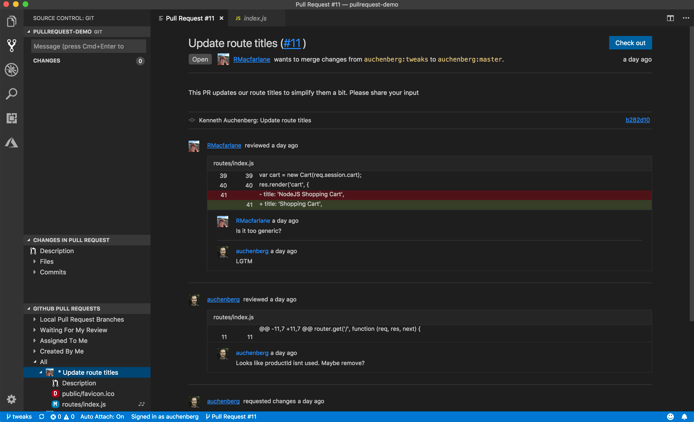 There are a few bugs here and there, but the review experience is definitely better than using githubs web editor, can only recommend it.

The next one has saved me a lot of time going back and forward with the CI, commit hooks are nothing new, but setting them up can be unglamorous, husky is the tool for the job (I recently heard about lefthook, I’ll give that one a try later),after you add husky to your dependencies, you only need to specify a husky property in your package.json, afterwards everytime you do a yarn install new hooks are generated for you, I have the following configuration:

It basically saves me having to wait minutes for CI to boot up and inform me of my trivial mistakes, my machine is definitely a lot faster the environment provided by circleCI, I can run the tests in 10 seconds while the CI environment takes at least 2 minutes to run the same sequence of commands.

I’ve always been using nvm, but recently discovered volta (formerly notion), the basic idea is the same, managing different versions of node/yarn/etc, I had some minor configuration problems with global packages not being recognized on bash scripts, but seems like a suitable replacement for nvm, would recommend you to try it for and your team

I’m always looking forward to learn new things, if you have any tips to make this workflow faster don’t doubt to send me an email at ospfranco@protonmail.com

There is one more configuration that has been quite a time saver in my daily workflow, and that is enabling absolute paths to work with react-native and jest.

On your babel.config.js (might not work with the older babel.rc config), on the module resolver, I changed it to the following configuration:

(adding an alias for the root config)

On your tsconfig, you also need to specify some properties:

Afterwards you should be able to get all your modules absolute importable and even works with jest.