I love computers, I love being an engineer, the other day I woke up and suddenly remembered something that happened during my highschool years.

I grew up in Bolivia, and as you can imagine the school system is not among the best in the world, however my class was the first one of a new study plan proposed by the government at the time, we were supposed to be educated with a far greater focus on self-judgment and “new” technologies (computers mind you), to follow this guidelines my school created a new class, it was called “technology”, mind you compared to a first world country computer class we were leaps and bounds behind, but the concept was still novelty and you have to start somewhere.

In this class we not only occasionally played with computers, but sometimes did other projects that were supposed to stimulate our creativity (and teamwork), I did ok most of the time, grades were poor, heard there was some personal issue but I choose to ignore it, in any case, there was this one time where the class was assigned a “engineering” project, we were given as many sheets of hard paper (cartulinas we call them in spanish), glue, scotch tape and a few other things and a marble, like this one: 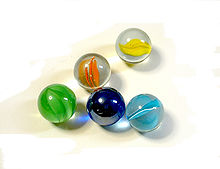 The objective was to build a contraption with the materials, were the marble would be kept in motion for at least 11 seconds, it could be as small or as big an necessary, but we could only use the material given to us, and we had a couple of hours (the duration of a day’s class) to achieve the objective.

Now, why am I telling you this, because you see, I was an OK student, except for very particular subjects that really appealed to me, math was ok but never my forte, but I really liked physics because it felt a lot more tangible than pure math, I was also pretty good at technical drawings, because there we’re rules that made sense and made the job abstracted enough that I could easily reason about the problems such as perspective. My group of friends in highschool, were also like minded, there was not really a “popular” group, we played a lot of basketball and at the same time we we’re the nerds in class (I was probably the lower grade-achieving of them all or as some would say, the dumbest).

In any case, the entire class starts with this project, and things start to go awry right from the start for most of the class, people (kids mind you, 15 - 16 years old) start bending and glueing as much sheets of paper as they can, my group as well, but slowly things start taking different turns, most of the class goes for “big”, they do this out of pure intuition, they think “the bigger the contraption, the longer the marble will stay in there”, we initially go for the same approach, but as soon as we have finished the first ramps… we start testing, and while most other teams keep bending and glueing paper like mad, we make the first adjustments, the angle needs to be right to make the most out of our ramps, if the angle is right, we can more or less get a feeling of how long does each ramp takes, and based on that we know how many ramps we will need to get to 11 seconds, we also choose for fairly simple design, some tight turns we thought, should decelerate the marble and buy us some more time.

Clock keeps ticking away, you can start hearing the frustration of some of the teams, they keep adding more and more to the mess of paper and glue, meanwhile we are finishing our “theoretically this should be enough ramp”, it’s pretty small, looks great, we put it together… disaster, we are still missing around 4 seconds… clearly we missed something, we look around, one other team seems to be close to reaching the objective… their contraption keeps growing in height, time for some quick thinking, we probably don’t have enough time to build more ramps and add up vertically, we have to make due with the current design and size, then I think, let me just stick so paper flaps at the right position, enough that marble will loose some speed, but not too much that it will get stuck, so we are back to some quick prototyping and testing, putting the sheets of paper at the beginning and end of each ramp… times up!

Time to present the results, there were around 8 groups, only 2 managed to break the limit, we go last, groups start presenting their projects, some almost make it, others are not even close, the ones with the monstrosity, it is a sight to behold, glue is dripping everywhere, scotch tape is an integral part of the structure and it needs to be held by someone, because it is about a meter tall and wide and no amount of paper and glue provide enough structural integrity to sustain the thing, they drop the marble, and it goes so fast! but the thing is also huge… 11.1 seconds, now it is our turn, our small thing is probably 20 cm tall and 30 cm wide, drop it, absolute silence… 12 seconds, we made it! and how! what a rush of emotions I felt.

Unfortunately I have no pictures of our creation (smartphones weren’t a thing), both remained in the class for sometime for the teacher to show to other groups, but I think eventually they got tossed away, but here is a illustration somewhat to scale of how the to projects looked like:

I’m now approaching 30, I have moved away from my country and through many twists and turns I’ve been working on the software industry for close to 10 years now, yet the passion to solve problems and my love for computers remain a constant in my life, out of my group of friends in school almost all of them became engineers, one also lives here in Germany, and while not economically noteworthy I would like to consider all of us successful, and that brought me to notice, some people are just meant to be engineers and I don’t mean computer engineers, just “solving problems” engineers, you could take away my computer and give me a piece of paper, a pencil and a problem and I would still enjoy the heck out of myself…

I have learned many things over the years, such as not having contempt for other professions, it was until I created a product on my own and failed to sell any significant number of copies that I truly began to appreciate the labor of marketers and sales people, but I do hold engineers in a different level of esteem, no matter where they come.

Anyways I hope you enjoyed this little story, it sure brought a smile to my face when I remembered it.